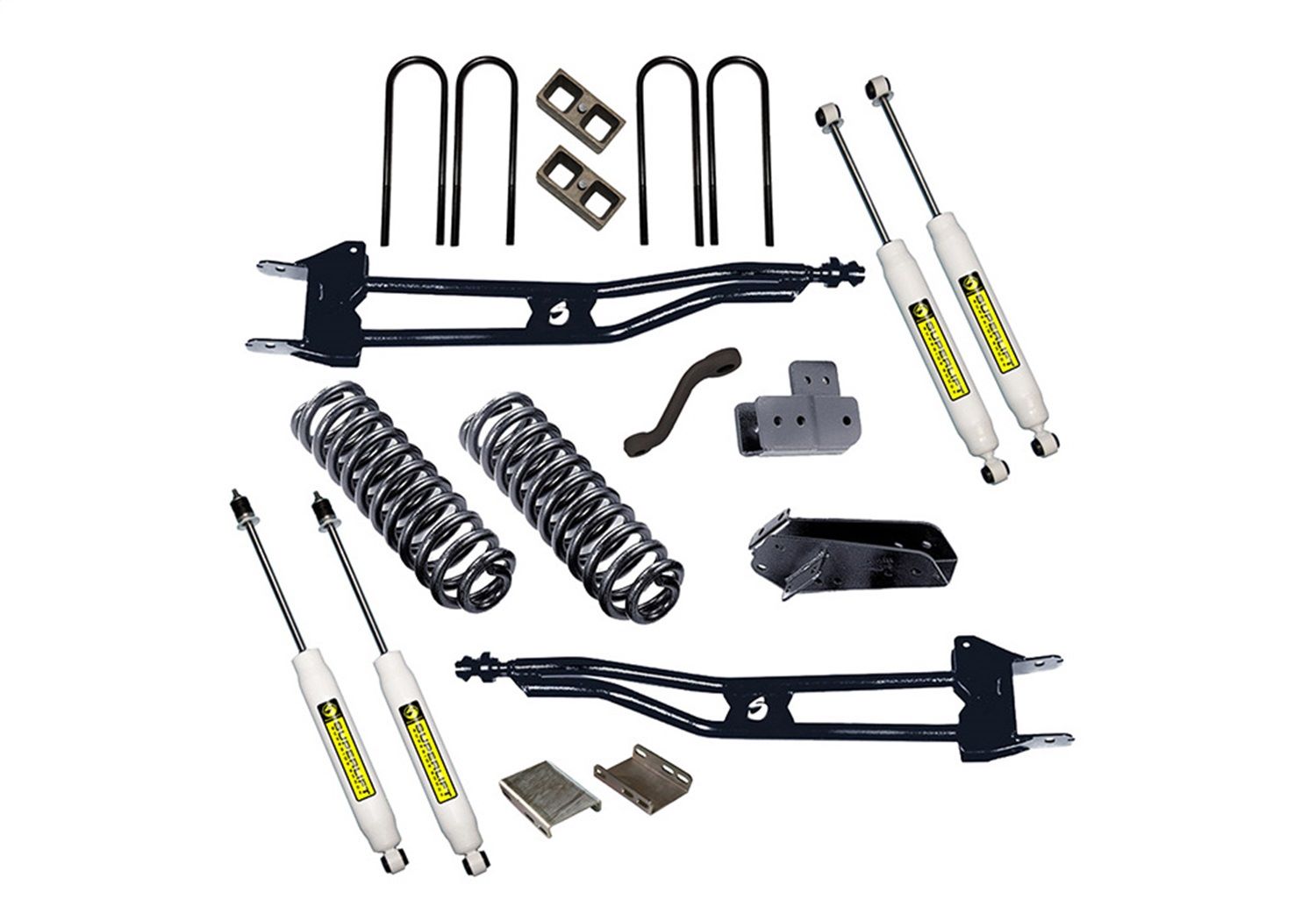 This is the SUPERLIFT 6 inch suspension lift kit for the 1980-1996 Ford Bronco 4WD. With a SUPERLIFT suspension and more tire, your third-generation Ford BRONCO will have an awesome stance and more off-road ground clearance.

This SUPERLIFT system is designed for the 1980-1996 Ford Bronco 4WD owners looking to gain more ground clearance, wheel travel flexibility, and a straight-up stance. Our kit addresses all of your lift kit needs in terms of product quality, durability, craftsmanship, and price. It includes everything you need to lift your legendary Bronco.

1980 was the first time Ford used a 2-piece front axle, coil springs and radius arms on their full-size Ford Bronco. Ford called this version of their Independent Front Suspension (IFS) the Twin Traction Beam (TTB). The TTB axle is comprised of two beams that are mounted on pivots, with the tire at one end, and the pivot at the other. The pivots from both sides cross over the center. 2WD versions were called Twin-I Beam. The rear suspension remained a solid axle with leaf springs on both 4WD & 2WD models.

As the front ride height is raised on the TTB, the tops of the tires lean outward creating positive camber angle. With lifts over 2 inches, caster and camber angles must be addressed.

In stock form, the radius arms are parallel with the frame. Once lifted, the radius arms become angled because the axle end moves downward and the frame end remains fixed in the factory mount. Castor correction is handled by two different methods from SUPERLIFT.

Method 1: In the standard bracket kit, SUPERLIFT lowers the stock radius arm to frame mount with new drop-down brackets. You remove the factory mount and replace it with these heavy-duty SUPERLIFT mounting brackets.
Method 2: Replace the factory radius arms with longer Superunner radius arms. These arms are eighteen (18) inches longer than stock. You remove the factory mount and re-install it farther back on the frame. These longer arms offer many benefits to off-roading performance (reinforced axle mount, enhanced wheel travel, decreases camber changes during the suspension travel cycle, and more).

Camber correction is solved with new axle-to-crossmember lowering brackets. These strong, heavy-duty axle pivot brackets are constructed of 0.25 Inch steel plate. To precisely dial-in the camber angle, it may be necessary to replace stock eccentric camber bushings. Ford Dealers or your local alignment shop offers these bushings (usually available in set increments up to 2 degrees of change.)

Included in this system is a set of four (4) SUPERLIFT Superide hydraulic shocks absorbers. Superlift shock absorbers are designed to provide excellent ride quality, durability and longevity. They feature 10-stage, velocity-sensitive valving for maximum control on or off-road without sacrificing a comfortable ride. Shock resistance is continually adjusted, depending on the terrain and vehicle speed.

Warranty
All manufacturer warranties apply and we will support you as the customer in ensuring you get a quality product. For any questions or concerns please email info@customoffsets.com NOTE: Returns not related to a warranty issue may result in a 20% shipping, handling, and restocking fee.